So, 2 weeks on the diet equals 3 kilos of weight loss. I can live with that. Still not feeling hungry, and in fact it was rather practical while travelling to and from the coronation - all you needed was a shaker (or in this case my water bottle) and some water and you could eat anywhere. I'm sad that i missed the fabulous feast, but it was so beautiful, and the presentation was so spectacular that it was a feast for the eyes as well.


I hope to have the energy to write something about it later, but right now I am too tired. I left Ahtela in Finland at 6 am on Sunday (local time, 5 am Swedish time) and was home at 00.20 on Monday (Swedish time). Today I've been to the nurse about the weight loss programme and that's about it. I've tried to read the book "The Viking world" edited by Stefan Brink and Neil Price, but I keep falling asleep. We have it as course literature on a course I'm teaching, so I thought that I'd ought to read it. (Some of the articles annoy me too much to fall asleep though. You CAN NOT use 13th century written sources to prove anything about the 8th century. Or if you think you can: show me why you think it's possible. Thank the gods I will only teach the Middle Ages.)

If I'm lucky others will post their photos online that I cvan direct you to. Since I was mostly in public view I couldn't take many photos, just a few of myself after I've left the main hall.

Since I don't like taking up my cell phone in public during events I mostly have posed photos. Of course I also sat in front at court and at the high table so it would have been absolutely impossible. I'm sure that there will plenty of good photos that I can direct you to later.

So most of the photos are of Åbo/Turku castle and it's collections, and of nature. But there are a few posed ones of me.

The first leg of the trip was train to Lidköping, some 130 kilometres north of Gothenburg, leaving at 1 pm on Wednesday. There my friend Vanna picked me up and we went to Karlsborg 100 kilometres roughly to the east, to pick up another friend: Jovi. From there qwe proceeded to Stockholm, more precisely the beautiful island of Ekerö, about 315 kilometres to the North and East. The roads were bad due to heavy snow fall and we weren't there until maybe 22 pm. There we stayed with another friend, Annika, over night, and until half past five in the evening on Thursday when we got into her car and went in to Stockholm to the ferry to Åbo/Turku which left at eight. It was very cold, around -15 C/5 F and a rather strong wind. It was also rather cold in the house where we slept, around 13 C/55 F, but with a woollen blanket and a woollen cloak on top of the quilt I slept well.
And it was stunningly beautiful. 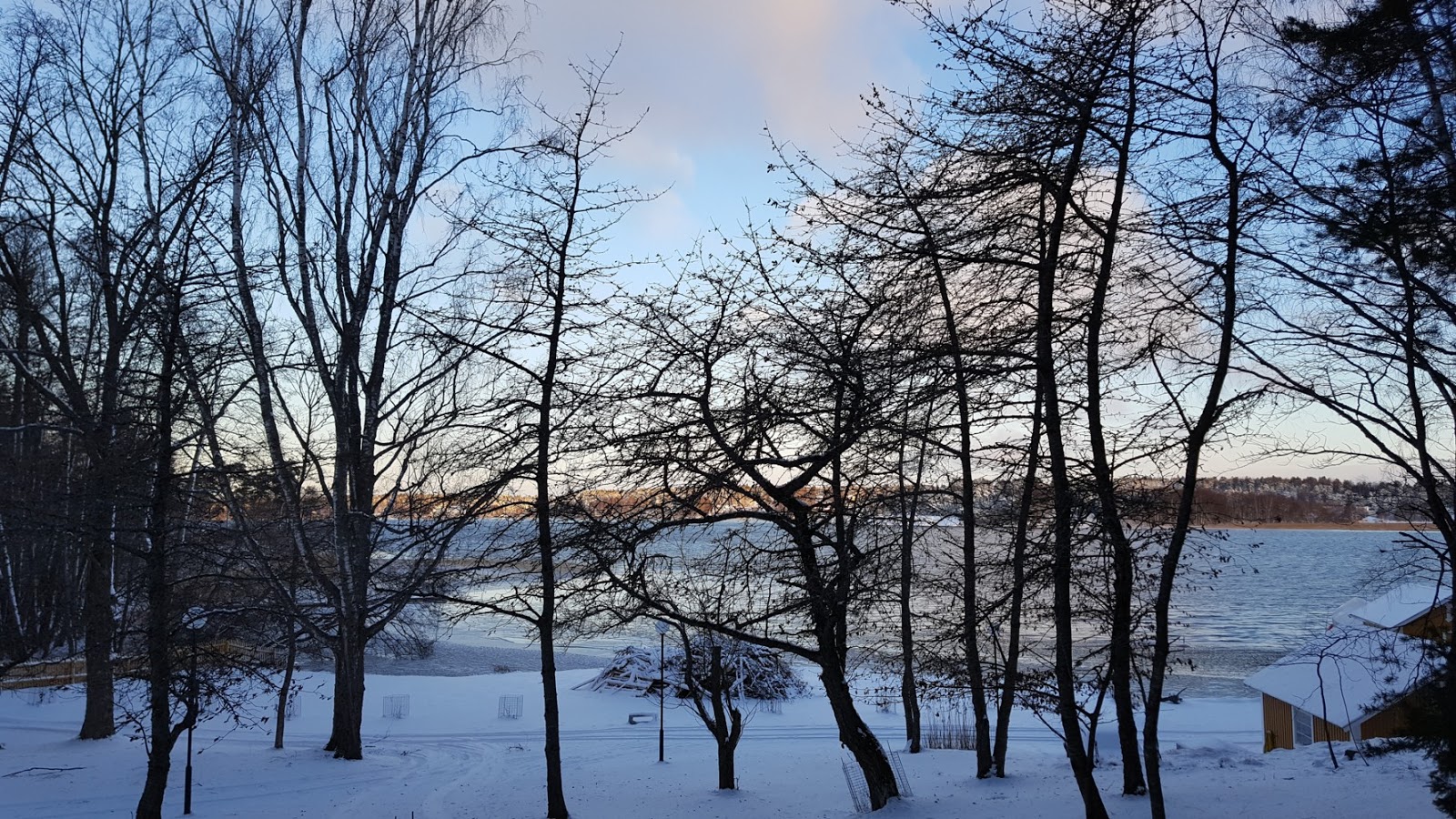 The ferry takes about 10 hours and most of that (though not enough of course) was spent sleeping. There were lots of us going to the event on the boat and much merriment was had, as well as last minute sewing ;)

Since we arrived in Åbo/Turku before dawn we couldn't go directly to the site, so after breakfast at a hotel people set out to look at things - in my case I went to the castle with my friends Gudrun and Leif.
I hadn't been in Finland since 1979, and then I didn't see the castle, so I felt that it was a must. There are lots of stairs, so it's not for the faint of either heart or body.
It was also -22 C/-9 F and windy. 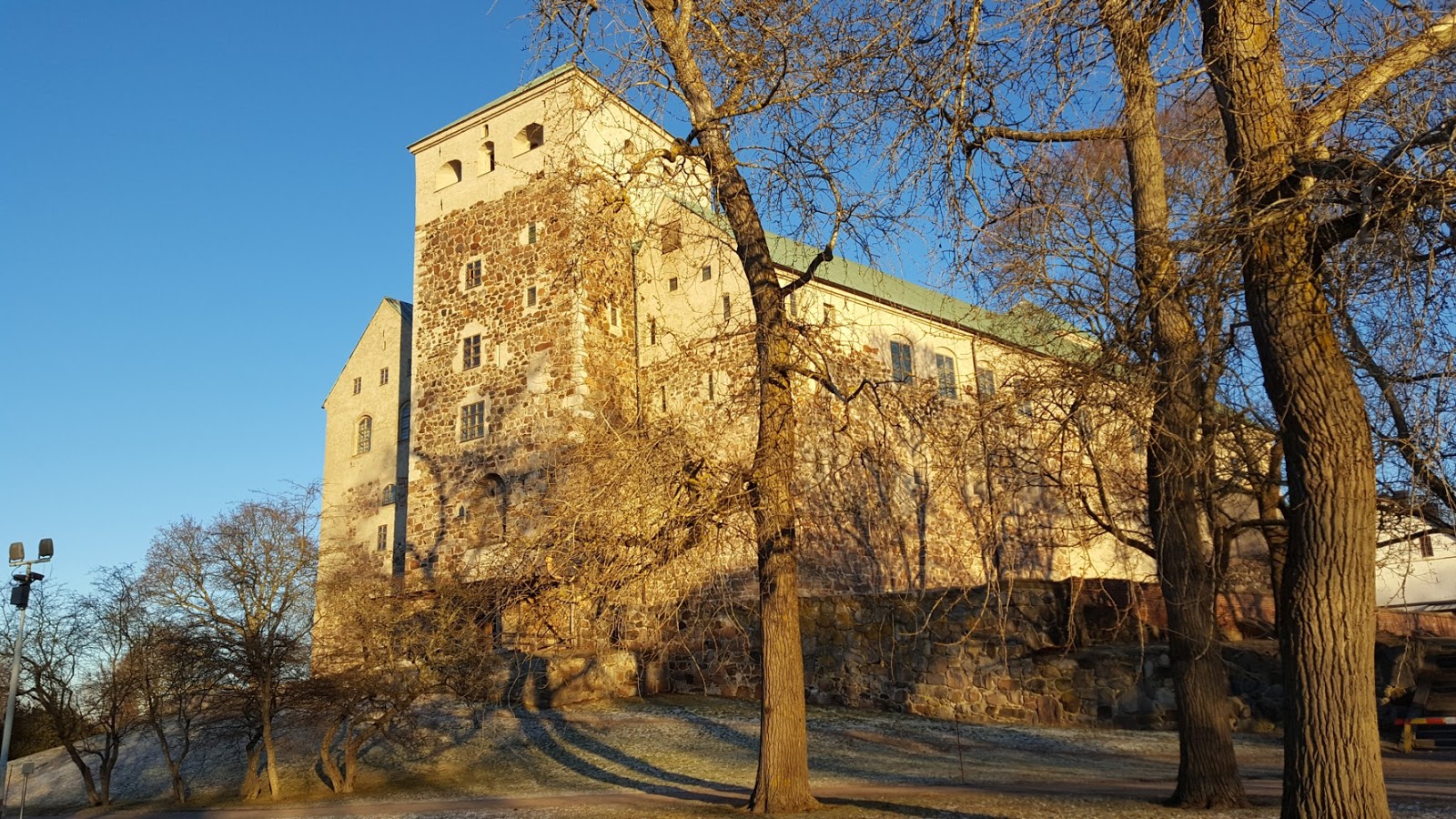 After the castle people had a late lunch and then we went to the site in Ahtela, which is a kind of scouting camp in the forest in Sauvo at the coast. It was snowy, but much warmer then - just below zero /32F.

When we were there there was a light dinner (soup I think) and then at 9 p.m court. I wore my mi-parti italian wool gown and to my joy realized that I need a new hole in my apprentice belt! I also had my gold striped veil. 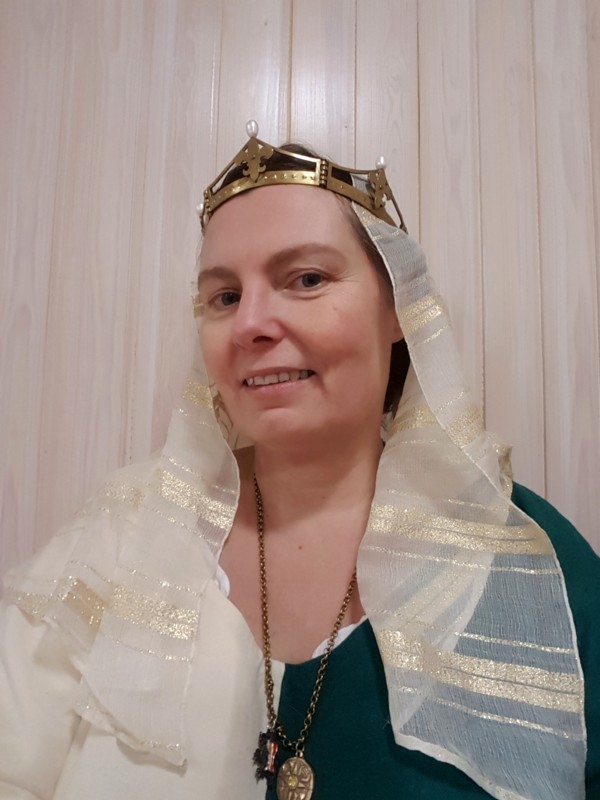 I went to bed early, because all landed nobility were to be at the Royal Sauna at 8 a.m on Saturday morning. But that will have to be told tomorrow, for now I must go to bed.
Collapse