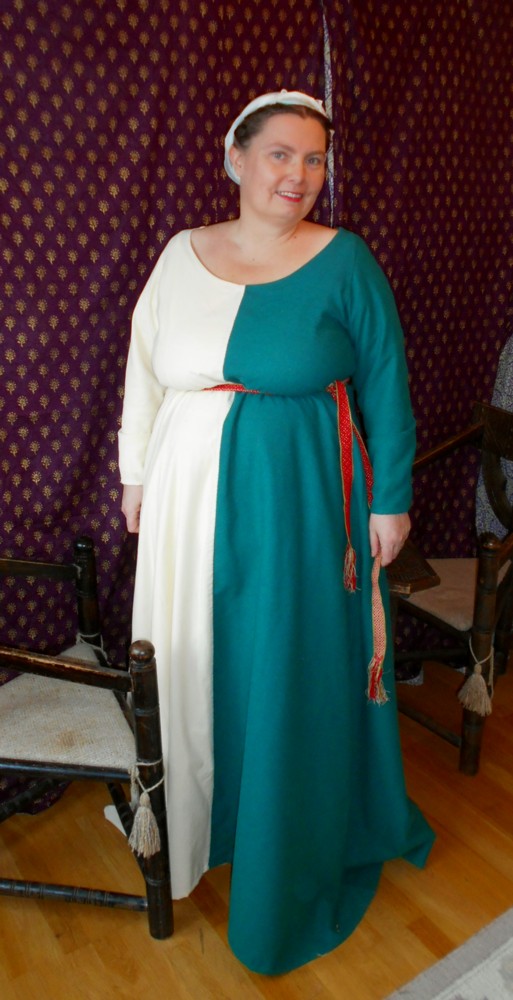 And I am working on the white one with red print.

After that I think I have done the taking in that I need to do right now, though the raspberry pink Italian overgown I took photos of in Bologna also needs to be taken in, probably before Double Wars in May.

I ahd a sewing meeting for Gotvik yesterday, I hold them every other Thursday, and I started on the lacing holes on Valeria's Elonora di Toledo gown. 1/4 done.

I have also decided to make a floor for my smaller pavillion, and to sell my old big pavillion. It's perfect for a family with two or three kids, but we don't use it anymore, because usually not everyone goes along, and Valeria will need her own tent pretty soon anyway. In fact, I have inherited a friend's old tent for her, but I need to fix some new aluminium pipes, and press them together and bend them slightly at one edge. And I don't really know where to get that done. Hopefully I will sort this out.

We have also decided not to make beds, but to buy cheap wood beds from IKEA to use in the pavillion. If I have the energy I will make a few collapsible chests, like these. We just don't have the storage space for my old solid wood chests, so I have given them away (they were also stuck on the island of Gotland), where I haven't done any camping since 2010.

Tomorrow, after going shopping with Maja, and guarding the square in case teh neo nazis decide to turn up again I'm going to start on that floor cover, I would like to have a printed or painted pattern on it.